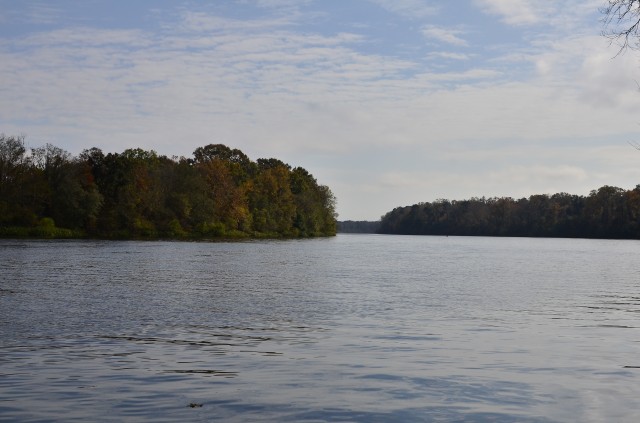 A section of the Chattahoochee River border between Florida and Georgia.
Photo by David Moore

In an effort to address the growing controversy between Florida and Georgia over the waters of the Apalachicola-Chattahoochee-Flint River Basin, Florida has filed a motion for leave to file a bill of complaint with the US Supreme Court under the Court’s original and exclusive jurisdiction to resolve “controversies between two or more states.”  Georgia’s response is due January 31, 2014. If the Court grants Florida leave to file, this will mark the 100th controversy between states that has been litigated in the Supreme Court.

Florida seeks a decree for an equitable apportionment of the waters of the Apalachicola-Chattahoochee-Flint River Basin, which straddles the borders of Florida, Georgia and Alabama.  Florida asserts that Georgia’s storage and consumption of the waters of the Chattahoochee and Flint River Basins reduces the interstate flow of water into the Apalachicola River Basin. Florida claims that this flow reduction damages “numerous species and habitats in the Apalachicola Region’s ecosystem and the overall economic, environmental, and social health and viability of the region” and is responsible for the “recent collapse of the oyster fishery in Apalachicola Bay.” 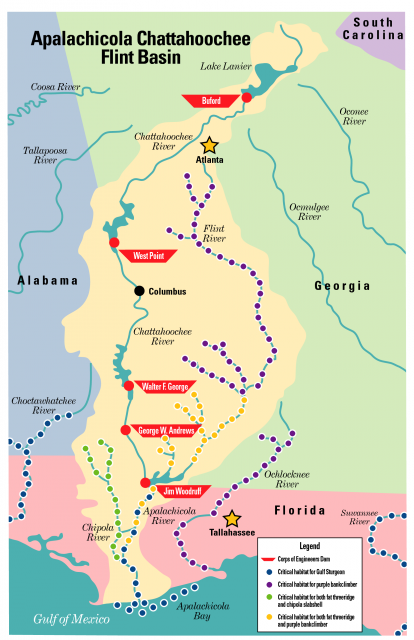 Map of the Apalachicola Chattahoochee Flint Basin Courtesy of docstoc.com.

Florida’s requested apportionment would include all waters hydrologically connected to the Chattahoochee and Flint Rivers, including groundwater, rivers, streams, creeks, draws, and drainages.  Specifically, Florida requests that the Supreme Court enjoin Georgia from interfering with Florida’s rights and impose a cap on “Georgia’s overall depletive water uses” from the basin “at the level then existing on January 3, 1992,” the date that Florida, Georgia, and Alabama entered into an ultimately unsuccessful Memorandum of Agreement to resolve the brewing dispute over water resources. The requested cap would be below existing levels and would be far below the projected withdrawal of 705 million gallons per day by 2040.

The potential implications of this case are far-reaching.  For example, in a similar suit filed by Nebraska against Colorado and Wyoming over the waters of the North Platte River, the Supreme Court issued an order in 1945 that not only enjoined Colorado and Wyoming from withdrawing water but also enjoined the states from permitting the withdrawal of water by anyone else within their borders.  In light of the potential effects that Florida’s suit may have on businesses operating within Florida and Georgia, as well as the implications for future equitable apportionment cases, we will provide updates on this litigation as it develops.